Don’t miss the 2nd year of Ann Robideaux’s “NYC DANCES”, dance films that are filmed in public parks, with public participants and screened for free to the public on a NYC public park raquetball court wall presented by MovieHouse. 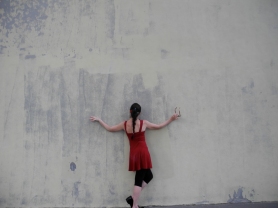 This year, Ann came across 15 girls in brightly colored tutus, young boys who wanted to show off their basketball skills and several other friendly “strangers”.  “Fun and heart-warming pieces” …see the culimination in several short films premiering this evening.

Still not sold on going? Here’s some raw playground footage to check out and a short video taken by a member of last year’s crowd…but of course, we will only show the polished and finished products at Cinema Parque, Aug. 27th!